New year, new decade! I am a reflective nerd, so I’ve loved looking back at 2019. Despite the widespread, enormous trickiness we’ve faced, there have been incredible manifestations of peace and social action networks everywhere.

I’ve been thinking back to when the DSEI arms fair came to London in September, when a community of Friends organised as and with 600 Quakers and allies to block the road to the fair. People gathered to sing together and speak of their deeply spiritual commitment to peace; there were lock-ons, interfaith prayers and placards stating,

This is not a migrant crisis – this is a crisis of inequality, war and climate change.

By peacefully blocking the road, Quakers and allies disrupted preparations for an event that exists to sell weapons of death for profit. It was nonviolence in action, and it was beautiful.

That was three months into my role here at BYM as Turning The Tide Programme Coordinator. I’d supported the DSEI action organisers, the grassroots Quaker network Roots of Resistance, by facilitating a series of online conference calls on our rights to protest for peace.

Now that I’ve been in my role for seven months, I’ve contributed to the ‘Intergenerational Conciliation’ event at Woodbrooke, facilitated workshops, spoke about my (personal involvement) in the  Stansted 15 case for the Quaker Asylum Refugee Network, and supported Extinction Rebellion and Jai Jagat UK peace-walker Friends. I have met and learnt from our TTT East Africa colleague Benard Agona, who sure had some sage advice for us given our ‘bad year’,

You must learn to ask for help.

And in November there was the Quaker Activist Gathering to run, where more than 80 Quakers turned up for a buzzing and lively day! Wonderful volunteers put on a crèche for the littlest ones, while teenagers, veteran peace campaigners, people entirely new to Quakerism, and Quakers entirely new to activism alike went along to workshops. Together we looked at ‘Doing Hope’, community organising, craftivism, universal basic income, and the connections between peace, equality and sustainability.

Now we have a new year! As Quakers, perhaps like me you have looked to our testimonies (values) – equality and justice, simplicity and sustainability, truth and integrity, peace – for grounding and commitment in setting resolutions.

Looking for where social action and nonviolent resistance needs to happen. I found myself comparing our testimonies and Quaker work to what the new government has been doing…

Equality and justice: four days after the election, the new Government cut the disability benefits of 650,000 vulnerable humans. The current UK government has refused to rule out a potential trade deal with the United States [which] could put vital parts of the NHS at risk of privatisation.

So if you’re poor, you die.

As reported by Astra Taylor in The Guardian.

Simplicity and sustainability: the UK government is completely disregarding the science that calls for the need to reduce emission by 45% from 2010 levels as soon as possible and to get to zero net emissions by at least 2050 (Guardian, 18th January 2020).

Peace – the EAPPI programme and Britain Yearly Meeting’s stance: in their 2019 manifesto, the Conservatives pledged to “ban public bodies from imposing their own direct or indirect boycotts, disinvestment or sanctions campaigns against foreign countries” e.g. Israel.

MPs voted 348 to 252 against the amendment, which would have guaranteed the right of unaccompanied child refugees to be reunited with family living in the UK after Brexit. The pledge was included in a previous version of the Brexit bill, but was removed after the Tories’ election win.

And in their Christmas newsletter, Right to Remain stated

Well, December has shown us how hard it will be to achieve migration justice through parliament any time soon. We will carry on building power, connectedness and hope in our communities, in our streets.

This is the spirit I will be kindling in Turning The Tide work, as well as looking to our nonviolent principles for further guidance. These are the two I find most tricky:

Currently, I am supporting Alton Meeting as they launch their ‘Open Minds’ project, where they will learn as a community from people who are experts by experience, about issues including homelessness, gender diversity, and fighting colonialism. Alton Friends and Wagner are using the Beautiful Trouble principle of meeting people where they are at.

This approach is powerful, as shown by German museum director Hilke Wagner. When far right extremism arose in Dresden, she responded by organising a roster of dialogue events, starting with open-invitation discussion series, recalling how difficult it was initially,

We had shouting, door slamming, a lot of arguments and accusations. But it did develop in a positive direction… I found it important to establish this feeling of personal relationship. We had participants from across the social and political spectrum, with a range of attitudes. And we learned a lot from each other.

Coming up I’ll be working with climate strikers in Manchester, running an activist training on a Quaker young people’s retreat, working with XR Quakers, looking at how we defend our right to protest, and running Quaker Activist Gathering 2020.

It will be a year of purposeful action

At times we will all struggle with the realness of 2020, at our government’s policies and actions, and the lived experiences of poverty and inequality we want to challenge. I will be asking,

What is needed? How can we be the change we want to see?

I remember a conversation a couple of years ago when I was new to Quakerism. A Friend told me something about our community that stuck with me,

We sit still and quiet, in order to do the work out there that is needed. 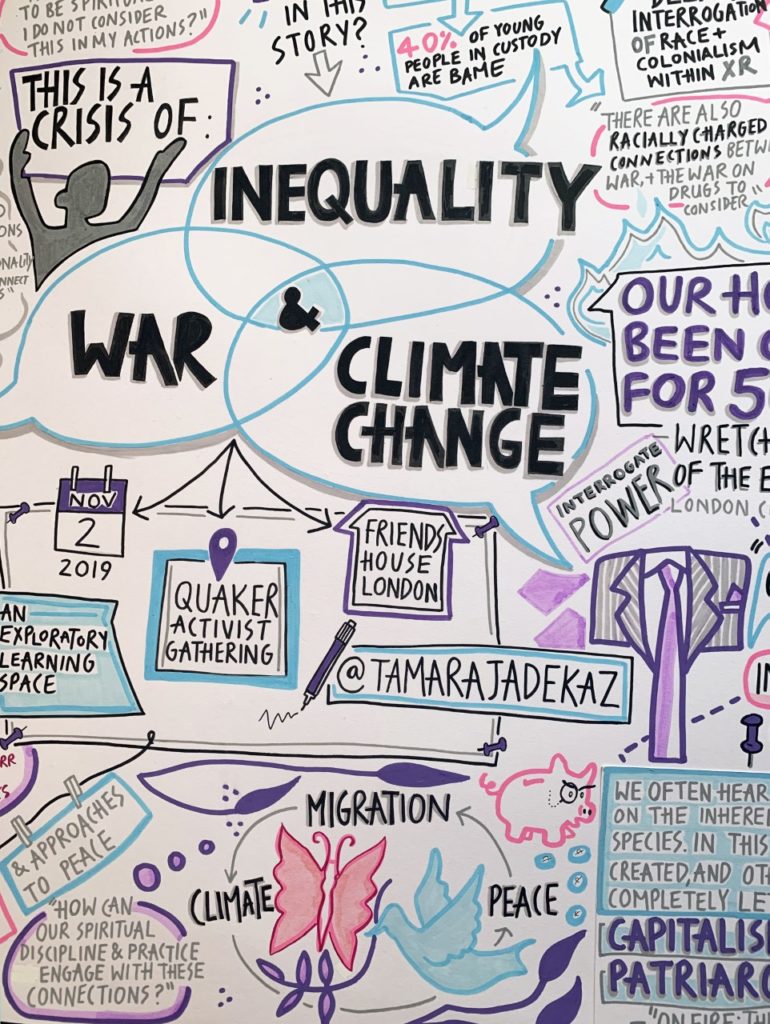