The day I received an email from a colleague asking us to share highlights from 2020 was also the day I received a card that told me where my birth Mother’s ashes would be scattered. She didn’t raise me, so this was a complicated loss and not on the scale of so many who have lost their nearest and dearest this year. My birth Mother was one of 66,000 people who died of COVID in a care home in England and Wales (between 2 March and 12 June). And that’s the thing about 2020, it’s hard to neatly compartmentalise the personal and the professional and to make space for the hopeful in spite of the grim.

But my colleague was right, it’s hugely important to notice the good, amidst the bleak.

Turning the Tide started 2020 with a powerful blog by TTT’s Programme Co-ordinator Lyndsay Burtonshaw, where they hoped “for a year of purposeful action”. And although things have obviously been strained and strange, Lyndsay managed to create and facilitate some incredibly valuable online spaces, courses, conversations and workshops.

During the period I was furloughed, along with two-thirds of BYM (Britain Yearly Meeting) colleagues, TTT led on two major pieces of work.

The first was a summer series of online workshops for Quaker Peace and Social Witness (28 May – 28 July 2020) on the theme of “Where our Witness is”. The ten workshops were delivered by colleagues from across QPSW, BYM and also involved Quaker activists, Northern Friends Peace Board (NFPB) and Turning the Tide East Africa. Themes ranged from climate justice to “can we teach peace?”

Lyndsay facilitated two of the workshops on “Testimonies in action” (with NFPB) and “What does love require of me? Spiritual Activism in this moment”.

The summer series was attended by nearly one thousand Quakers, from the Outer Hebrides to Cornwall, and from Rwanda to Hong Kong. 72% of those who responded to the evaluation confirmed that they were going to take some action or make a change in their life, as a result of participating. Just one of the many glowing comments was,

This final workshop summed up all of the QPSW summer series – ‘where our witness is’. There was time allocated to Quaker worship which introduced the idea of spiritual ‘peacemaking’ and gave me a lot of time to reflect as I moved through the workshop. I appreciated the way the presenter moved from peace activism to spiritual peacemaking. I found that deeply moving as it spoke directly to me and gave me a clear idea of the next steps I am able to take.

And then at the height of lockdown, an appalling act of racist police violence occurred that had far reaching impact. In the US, George Floyd died after being handcuffed and pinned to the ground by a police officer’s knee. This act of lethal violence was captured on video and led to protests erupting in the US and across many parts of the world.

As a response to this, Lyndsay and BYM colleagues felt called to devise, develop and facilitate a course (in partnership with the Woodbrooke Centre) entitled, “Black Lives Matter – whiteness and racial justice learning for Quakers.” 80 Quakers participated over the 5 weeks of the course with 100% of those who responded to the evaluation survey confirming that,  “I am going to take some action, or make a change in my life, as a result of this workshop.” One Friend reflected that, “This may prove to be one of the most important initiatives that COVID-19 has provided for us as white Quakers in Britain.” And another expressed their desire for change,

I have a strong sense of drive and hope coming out of this, and I look forward to seeing what changes come within Quakers as well as in the world as a result of this.

Looking back over 2020, I also appreciated remembering the energy and passion of the webinar speakers and 61 participants that took part in our ‘Inspiring Nonviolence’ course (in partnership with the Woodbrooke Centre) that ran from February to April. And it was good to come back after furlough in September and read some of the feedback comments such as,

The course exceeded my expectations. I feel that I have had a spiritual nudge to look at what I am doing as an activist and consider whether I could do things more effectively and contribute creatively.

Given the nonviolence course ended as lockdown began, I am also deeply grateful that we engaged two participatory artists (Uzma Kazi and Jean McEwan) to capture some of the rich learning and sharing on the course into a zine (creative booklet) which can be viewed here.

Just before being furloughed In April, we were also able to launch a new toolkit entitled, “Engaging with conflict: a toolkit for difficult times.” The toolkit contains wisdom from a range of practitioners and sources on engaging with conflict and resisting hate, including advice for community dialogue on divisive issues from Tariq Bashir of “Who Is Your Neighbour”. You can read the introductory blog and also access the toolkit in full.

The process of looking back over this year’s many good things amidst all the ongoing difficulties, resonates with how this year has felt on many levels. The horror of the UK’s COVID death toll and ever rising tide of poverty, alongside the beauty of the love, solidarity and mutual aid that has flourished in many of our neighbourhoods. The violent, racist injustice of George Floyd’s death (and the similar deaths of many others) alongside the groundswell of solidarity and recognition of the need to act to resist and transform racism, violence and injustice here in the UK as much as anywhere.

And as the good news of the vaccines break with all the hopes of being able to meet and hug our loved ones again, there’s also the fear that we might return to ‘business as usual’ in a world where deep and lasting change is needed more than ever. The sort of change that “Message from the Future ii: The Years of Repair” imagines in a short animation.

As I look back, I’m also reflecting on the things that have sustained me this year on a personal level – witnessing radical love in action, seeing the swallows come and go unfettered by borders, walking on the moors and listening to music. And as I’m writing this, I’ve been thinking about Louis Armstrong’s “What a Wonderful World”. A song first sung against a backdrop of political turmoil, racism and war. So as 2020 gives way to 2021, I hope that we all find ways of acknowledging the difficult stuff, imagining what needs to change, and like the words in the song, recognising the wonderful where we can.

I see skies of blue and clouds of white
The bright blessed day, the dark sacred night. 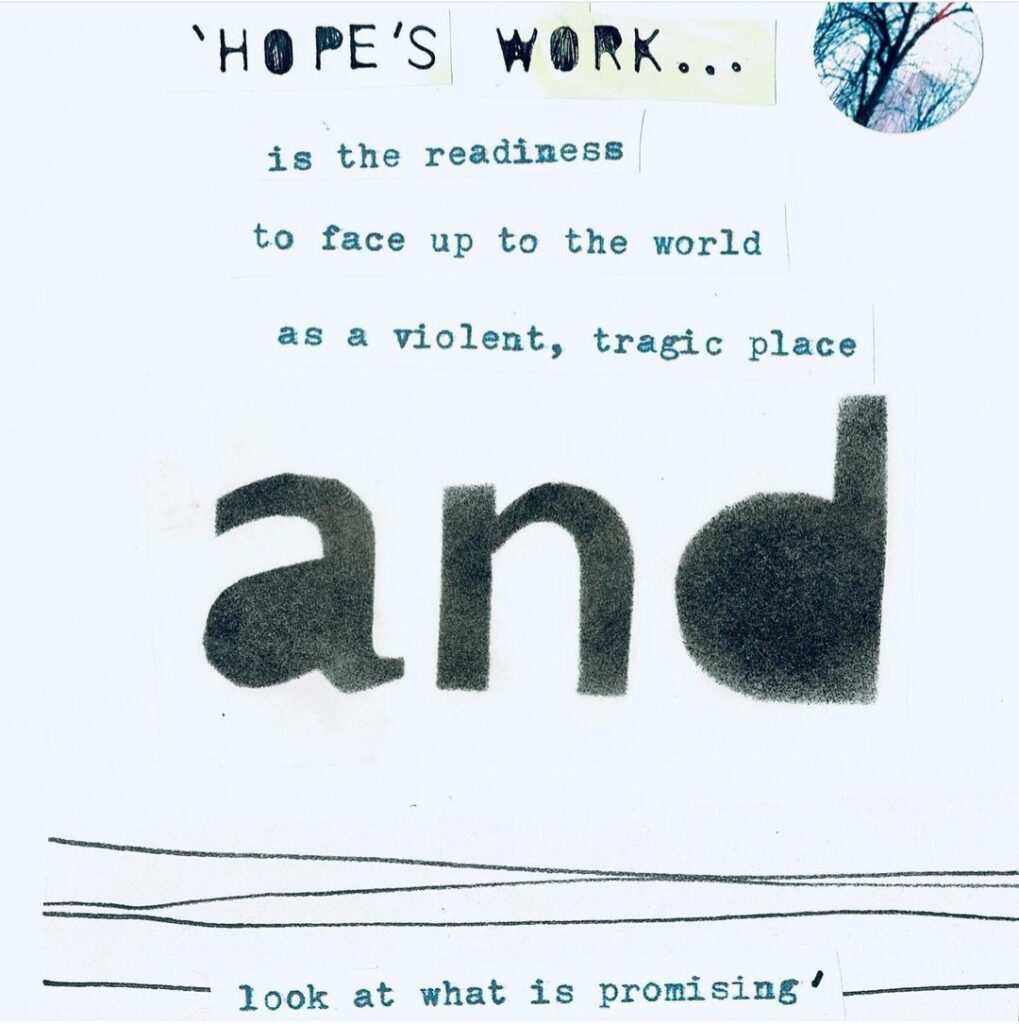